Canada remains the fastest growing Country in the G7 with a population that has grown 5.2% since 2016 and now totals 36,991,981. Our population continues to urbanize, with close to 27.3 million people living in one of Canada’s 41 urban centres. Immigration has contributed heavily to Canadas population growth since 2016 as nearly four-fifths of population growth are directly attributed to immigration.

The population of Ontario grew at a faster pace than Canada, reporting 14,223,942 residents in 2021. This represents a growth rate of 5.8% from the previous census. The growth in Ontario’s population was mainly attributed to immigration with twice as many permanent and temporary immigrants being welcomed into the province then the previous census period (2011-2016). Population growth within Ontario’s major urban centres have continued to experience significant growth, figure 1 below shows the growth rates for major census metropolitan areas (CMA) within Ontario during the last two census periods. All major CMA’s have shown increased levels of growth since the last census period except for the Toronto CMA which recorded a 1.6% decrease in growth rate since the last census period. Toronto CMA’s growth rate is still positive for 2021 at 4.6%. 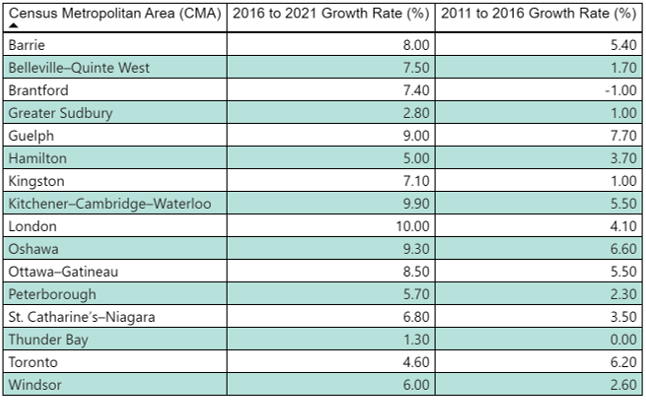 The Toronto Census Metropolitan Area which includes twenty-four municipalities saw a 4.6% increase in population between 2016 and 2021 with a total population of 6,202,225 residents. The largest cities within the CMA have experienced positive growth (except for Mississauga at   -0.5%). Figure 2 below highlights the population growth rates and changes of cities within the Toronto CMA.

Vaughan’s population grew by 5.5% from 2016 to 2021, now totalling 323,103 residents. The City’s dwelling count has increased by 10,502, totalling 107,159 dwellings in 2021 The City’s Overall population density since 2016 has increased by 66.5 residents, now sitting at 1,185 residents per square kilometer in 2021. More information on dwelling counts, demographics, labour and more will be presented to Council upon release by Statistics Canada. Please see future release dates specified below by topic.

Statistics Canada will release 2021 Census topics throughout 2022. Economic Development will continue to monitor and provide council with information on Vaughan’s growing demographics and economy.